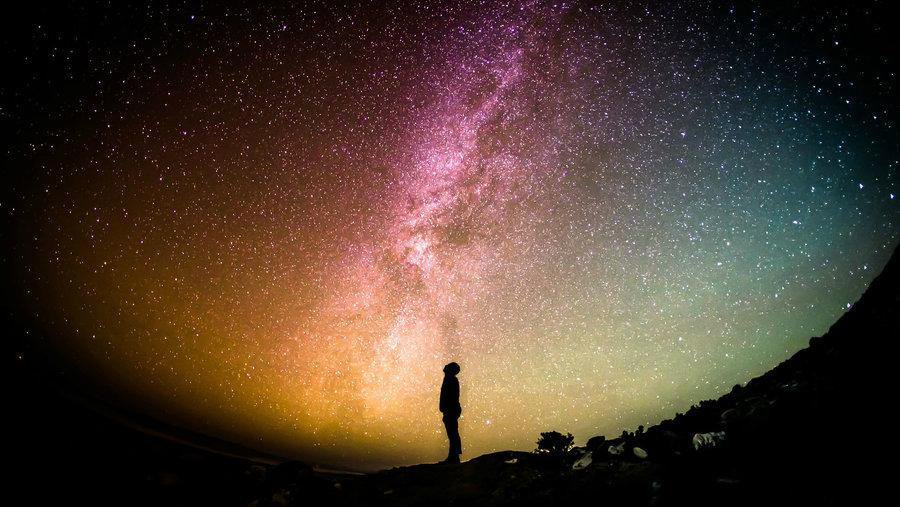 This Universe, indeed, displays a remarkable vista of order and consistency. We can observe, for example, the great regularity with which the celestial bodies follow precise orbits, and marvel at the way in which water from the seas is brought to the land by wind-driven clouds, which are in turn formed by the evaporation of water: without this replenishment, life would be impossible. We are also amazed by the migration patterns of many species, including newborn eels, relentlessly trekking through thousands of miles of ocean, to nestle in their own local streams, and of bees, who use sunlight for navigation in their quest for nectar. We may ponder as to why all things exist, stabilize, join, split or procreate with functional parity manifested on various levels, and contemplate on the optimality of the processes which comprise the whole universe. Even incredibly minute changes would disrupt the balances in nature: after all, had the earth’s orbit been slightly offset in either direction, water and the resulting forms of life would not have emerged. In fact, we can observe and are awed by the great unity in the laws of the cosmos; through the spectrum of life and non-life ranging from the microcosmic subatomic particles to the macrocosmic expanse of the universe itself, integration is manifested on, and between, every level. Reflections may lead us to pertinent questions: Could such encompassing order have arisen purely by unintentioned accident? Or could there be an intelligent originator to this spectacular array of living and non-living forms—a designer that may have developed or evolved them through processes which have yet to be fully determined? What conclusions are evidential? Is it probable that all the letters on this page unscrambled themselves by chance to form these meaningful and structured sentences? How then, could a human being—with ears, eyes and a mind—have been formed by chance? Is it credible that such a vast universe with an inestimable billions of galaxies could have evolved by accident? Does not the integration and complexity of a single cell far exceed that of a mere piece of paper with some intelligible writing on it, let alone this universe and all that it contains? Especially since the universe also contains this piece of paper!

We know that we are not the cause of ourselves, for embryonic development is organized and directed in stages under natural laws. But directed by what and by whose laws? Chance or Intelligence? What about a multiplicity of infinite beings? Could such have been responsible for this cosmological fabrication? Would not the resulting state of this universe have then been disordered and chaotic due to the conflicting commands of these infinitely powerful entities, who would have been trying to accede to the throne of authority in rivalry? Indeed, in such a regime, we would expect to see inconsistency in the universe as opposed to consistency. Instead of rain, we might conceivably have received a heavy downpour of elephants from the skies. Indeed, an umbrella would certainly not be terribly useful in such a universe! Such a scenario would also give rise to the question: which of the infinite beings came first? And why? On the other hand, if such a multiplicity of infinite beings were in perfect agreement for all time, then there would not be any need for more than one—nor is there any evidence. If our response to the chance (unintentioned creation) and multiplicity (creation by two or more beings) hypotheses is negative, then our answer has to lie between zero and two. In other words, there can only be one unique governing intelligence—unique by the virtue of having no demigods, intermediaries, mystical incarnate beings, or any other human or nonhumans, as associates. This vast singular intelligence, then, must have created and developed all living and non-living things, as well as all particles/energy and time itself, and must therefore be independent of these. If this is our conclusion, then it means that the myriad forms of matter and energy as well as the physiological structure of the human being must be subject to the natural laws of this singular and independent governing intelligence. In addition to this involuntary physiological dependence of human beings to the prescribed natural laws, we are also endowed with a mind which has the capacity to voluntarily question and reason.

A reasoning person would be naturally drawn to the logical conclusion of the existence of a unique originator, and therefore of a meaningful purpose to this existence. Such a person would live in full cognizance of this awareness, in peace with himself or herself and the rest of nature. Indeed, reasoning persons do indeed live, and have been living throughout the ages, in all parts of the world. They can be found dwelling in the midst of exuberant jungles or in our large, populous and crowded cities. They may even exist on earthlike planets, in the far reaches of our ever-expanding universe. Such a people in any language would best be described, in a word or a sentence, as those who are in ‘voluntary peaceful submission’ to this unique Intelligence, brought about by the proper use of the intellect, be that language, English, Japanese, Arabic, Swahili, Russian, a thousand other earth languages, or those used by possible sentient beings in the rest of the galaxy. What would distinguish such individuals from the rest would be the employment of reason and evidence as the foundation for life.

Such persons, in one Earth language, would be Muslims