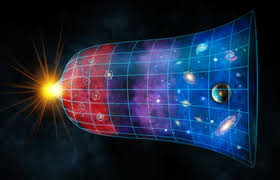 By Mehran Banaei and Nadeem Haque

From the emerging dawn of human civilization, Man has always reflected on the origin of the universe. He has marveled at the beauty and the order manifested in it. Like an earnest child asking inquisitively why the canopy of the sky has the hue of blue, mankind, in general, has always sought answers to such seemingly perplexing questions, having to do with the origins and destiny of the whole of existence. In a state of deep yearning, he stares at a starry sky and wonders: where does this universe start, where does it end? Does it have an actual edge, and if so what lies beyond it? He wonders: why does nature behave the way it does? As he contemplates, he sees the pattern of birth and death in the animate as well as in the inanimate world. In addition, he knows that his own body is not immune from this scheme either. But, what about this universe as a whole? Did this vast universe have a beginning in time, and if so would it ever finally come to an end? With the progression of scientific knowledge in this century, we have been able to gain a better understanding of the immensity of the cosmos. We have become privileged witnesses to the beginning of creation. It is now well established that space is rapidly expanding as all the countless galaxies, which are sprinkled in the stretching fabric of space are receding from each other at tremendous velocities approaching that of the speed of light. This would mean that once, the entire universe had been a ‘singular region’ where there was absolutely no space within and absolutely no time, for these were originated in a flashing instant when that singular region exploded to form our conceptions of space and time. For beings like us, who have always been engulfed within this dimension, it is indeed difficult to visually conceptualize that somehow these conceptions of space and time were simultaneously brought into existence from oblivious non-existence. Further knowledge confirmed this astonishingly unique event, when it was detected on a radiowave antenna that a constant background radiation permeates the whole of space. This background noise was no doubt the primeval remnant of that explosion which took place less than 15 billion years ago, commonly referred to as the Big Bang the singular moment in the creation of the totality of the universe.

But from this explosive expansion it was not disorder which resulted, but rather a deep penetrating order. Through the course of time, as the universe cooled, many structures arose: galaxies were formed that were comprised of immensely dense clusters of stars, flowing relentlessly across a vast cosmic ocean of space. In time, planets formed and subtle processes came into effect which allowed the emergence of life on earth. Subsequently, biological life developed due to the vital presence of the water-cycle and similar processes, producing a great diversity of plants and animals. Without water, there would have been no life springing from the dry earth. Remarkable balances between the living and non-living components of our planet allowed for the preservation, sustenance and continuation of life. The nurturing rays of the sun provided growth for life. Plants started to give off oxygen, which was necessary for all breathing beings, and animals returned carbon-dioxide which was necessary for the plants. Furthermore, each animal arose to be specialized and functioned to maintain the balances in nature. Without these processes life would not have been possible. By reflecting on the interpenetrations of origins and destiny, we may fully appreciate that so many are the celestial bodies that permeate space that they remain countless within its ever-expanding horizon. Yet even within this cosmologically stretching fabric, strewn with innumerable galaxies, we have not, thus far, conclusively been able to empirically determine the existence of any other ecosystems and extraterrestrial life. It was with the advent of these biological processes on earth, that there came a time when the most complex organism arose: the human being. Yet in essence, a human being, within his own lifetime, issues from the very processes inherent within the vastness of cosmic order. Human life begins with conception, and then, in just nine months, a nearly microscopic fertilized egg-cell is transformed through a truly remarkable process into a human infant, possessing heart, brain, eyes, muscles, lungs, and all the biological systems needed for survival outside the mother’s womb. It is indeed amazing to envisage that in the combination of such a tiny, minuscule part of drop of male semen and a female egg there exist specific parts responsible for the development of our complex body, mind and social being. In just a few years after birth, this newborn baby has grown into a human being well capable of learning a multitude of languages, of familiarizing himself with his environment, and has the capacity to be creative, learning to interact with others of his own kind and other species. As this human being is maturing and aging, the process of intellectual development and questioning continues actively, and as a sense-making creature he ponders on his origins and about his place in the universe. He becomes aware of the fact that the omnipresent face of death

Just as our sun had its own birth billions of years ago, so too is it eventually destined to extinguish itself into a shrunken, collapsed dead star and with it our earth will be rendered devoid of life, where once it had been so profuse. Life on earth is crucially dependent on the sun; indeed, had the earth’s orbit been even slightly offset in either direction, water and the resulting forms of life would not have emerged. Yet, our sun is only one tiny speck of light amidst an ordered scattering of billions upon billions of objects distributed throughout the vast reaches of space in time, which are all experiencing the same patterns of birth and death in the cosmos. But will the universe, which had its birth with the emergence of space and time, also have its fate sealed with the end of space and time? It is now theorized that depending on the density of the universe, it will either fade away into an infinite void as the stars disintegrate into a sea of obsolete radiation, or conversely, it will collapse into a Big Crunch as it reaches the limits of its expansion; there may yet be another mode for the collapse of the universe. In the Big Crunch, the overwhelming density of matter and energy, or some other physical mechanism, would have the effect of contracting the universe back into one singularity due to immense gravitational forces. Nevertheless, whatever the outcome is, it appears certain that the universe will end up either in the emptiness of space, where time will not be significant, or in the nothingness of absolutely no space and time, just as it was in the beginning. This is not obscure fantasy nor is it far-fetched science-fiction. It is derived from facts and scientific knowledge, even though it is not visually conceptualizable that space and time will simply vanish into the Nothingness of Nowhere.

As we engage in our mundane activities, such questions of origin and purpose persist deeply in the recesses of our psyche. Yet the tragically brute fact is that we generally tend to ignore the pursuit of such fundamental questions. If perchance we do, they oftentimes end up being mis-answered. Due to our passion-driven blindness towards sincerely seeking out true answers, we fail to understand the origin, and purpose of existence and, as a result, incompassionately end up destroying both natural systems and ourselves. Human beings have erroneously assumed that the whole panoply of creation that multifurcated from the Big Bang, was produced by sheer randomness instead of being created by incalculably intelligent non-randomness. We feel that since we have been cast onto the shores of a fortuitously hospitable planet – itself sprouting by chance from the sea of space and time – we simply ought to resign ourselves into making the best of our slot in the grand cosmic roulette. From the tottering academic fortresses spinning labyrinths of aimless vision, we are told to believe that our whole purpose, if any, after billions of years of program-like cosmic evolution, is to merely chase our own shadows on a spinning bluish dot, that calculatingly floats in the abyss of deep space. We are told that there cannot be answers to the fundamental questions of existence. However, we seem to ignore the stark fact that this unsubstantiated conclusion is itself an answer, and thus a blatant contradiction. We have opted for selective amnesia, from a remembrance of things past, of humble beginnings, such as our origin from recyclable stardust; indeed, we have forgotten the meaning of true sublimity, no longer walking humbly on the dust of the earth, our former and future physical state. Such it is that, being decapitated from our cosmic roots, we have managed to cocoon ourselves in an utterly purposeless vision. In this vision, we perceive our fractured selves as being at the center of the expanding universe. Trying to compensate for the concomitant alienation we feel in this cosmos, we think that we are all that matters, since we have arrogantly appointed ourselves as the chosen species. As unaccountable executive functionaries in an ‘accidental universe’, we act as if the plenitude of nature exists merely for the capricious whims and false securities of our insatiable consumption and plunderous appetites. Indeed, we have rendered ourselves obtuse to the harmonious polyphony of nature, and what it perennially points to. Given the above-mentioned facts, we may reflect as to whether there is a purpose behind the Big Bang, and ask such questions as: what role are we to play, if any, in the realm that has evolved afterwards? Did nature evolve from the Big Bang merely for subservience to Man? We have seen that this universe has originated from the non-existence of ‘space’ and ‘time’. The emergence of life into the intelligent consciousness of man has been facilitated and is dependent on the unfolding of time by precisely arranged, intelligently structured laws of nature. We have also seen that the universe will eventually devolve into a realm of nothingness. But why did it originate in the first place? And then why should it disappear again? From nothing to something and then from something to nothing with no meaningful purpose and no purposeful end? Is this a cosmic joke? Is this all there is?