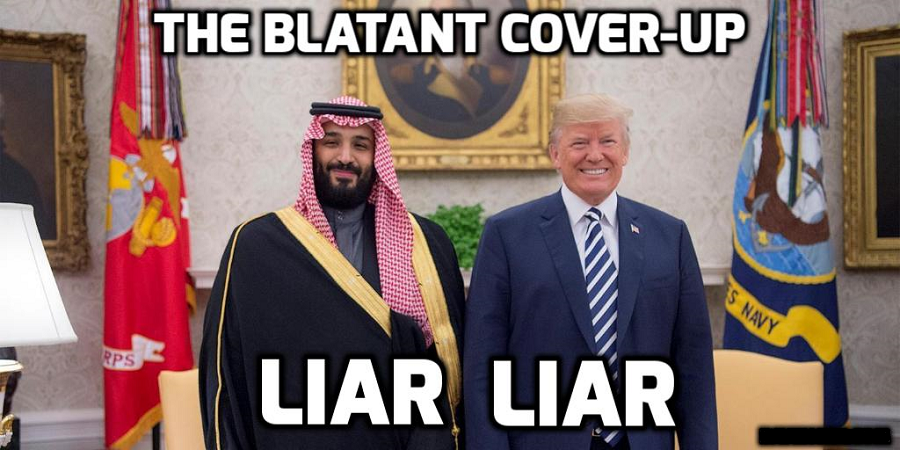 “It wasn’t me, it was my hand, blame it on the sleeve which controls the hand” is a famous poetic story in Persian children’s literature that all Iranian children are well familiar with. It is a story about a naughty little girl named Saba who frequently misbehaves and when is questioned by her parents, she starts to lie and come up with ridiculous defenses to get away from punishment for her mischief. Her notorious defense is that: “I didn’t do that, it was my hand!” She goes on to say the hand was under the control of the sleeve, and the sleeve, in turn, was controlled by the jacket. Nonetheless, I was wearing my brother’s jacket. Therefore, go blame my brother. A child may think that offering such an explanation may wash off her hands from any responsibilities for her wrongdoings. But, that is the expectation of an immature child growing up. Unlike a child, the grown up heads of states cannot be so naïve as to live in a child’s world.

The ludicrous explanation offered by the Saudi regime for killing of Jamal Khashoggi resembles very much the above childlike mentality. It further demonstrates the degree of sub-asinine-ness of the Saudi regime which expects the world to believe their nonsensical defense. After two weeks of flat denial, the Saudi mobsters start to gradually suggest that the slain journalist was somehow accidently killed in a fist fight. We are expected to believe that an overweight 59 year old entered the Saudi Consulate to engage in a fist fight like Bruce Lee, but ended up losing. Ironically, it all happened while the pious and innocent Saudi elites were kept in dark. The official Saudi position is that the so-called “King” and “Crown Prince” had no connections with this incident. Certain rogue elements orchestrated the murder without Riyadh’s knowledge. How convenient! Supposedly, the authorities in Riyadh learned about this incident when it became international headline news. This foolish damage control is an insult to human intellect. There is really no hope for anyone believing in such dribble. How do you accidently butcher a high-profile critic of the regime in a consulate? And then a minor detail: where is the body?

The more ridiculous part of this saga is when the United States President accepts the bizarre explanation as if it is plausible. He seems to be more upset with the mediocre level of the Saudi operation and their subsequent sloppy cover up, than the actual crime itself. Did they not drink enough coffee to stay awake in the “Cover-up 101” training sessions offered by the U.S. Intelligence Services? Trump is upset because after many years of costly PR campaign the true face of MBS, the darling of the West is finally exposed, a fake visionary reformer with hands soaked in blood. This phony presidential puppet is upset, because this gruesome political assassination has received more attention than the devastating invisible war in Yemen, which raises the question why is the U.S. selling so many weapons to the murderous Saudis to prolong this conflict. This episode clearly exposes the utterly sick relationship the Western nations have had and have continued to foster for hundreds of years with the Middle Eastern nations that even the dumbest jingoist in the West is now questioning.

There are two different accounts of what happened at the consulate reported by Turkish and Saudi authorities. The Turkish account indicates that the crime was premeditated and the victim was lured into the consulate to be killed. The Saudi version is that certain Saudi diplomats acted on their own without any authorization from Riyadh.

To identify the responsible party involved, there is no need to focus on the specific flaws in the provided alibi. No need exists to focus on the compiled evidences which are found to be contrary to what is said by the Saudis. No need exists to press them for countless unanswered questions, such as how the top Saudi autopsy specialist equipped with a bone saw ended up being Johnny-on-the-spot at the consulate. Or, how and where the  dismembered body was disposed of?

Let’s suppose we have a foggy case of “he said, she said”. Nevertheless, it is not hard to determine who the culprit is and identify those who are primarily responsible in this grotesque crime. The Saudi provided argument can still be easily debunked in principle. The dastardly MBS and his decrepit daddy conveniently ignore a key material fact in this case. Since when, has ignorance become an acceptable defense in any tribunal settings? “We did not know” can never be an excuse or in this case even be a remote possibility. A head of state is always in control, is always in command, particularly in an autocracy where the ruler is obsessed with power. In an autocratic system only the one on the top gives orders, be that the Caesar, the Pharaoh, the Supreme leader, the Emperor or the King of the Kings. He solely possesses absolute power. Everything else in this system is merely decor. In this system, the ruler can no longer put the blame on subordinates for the concomitant disastrous outcomes of his mandated actions. Here, a dictator cannot eat his cake and have it too. With the absolute power comes absolute responsibility. Therefore, in this system, when shit hits the fan, the ruler cannot blame the powerless sleeves for unintended consequences. The responsibility for the mess created is squarely on him. Sleeves have only been following the doomed orders of the wearer of the sleeves.

The rank hypocrisy is that the U.S. is supporting Arab dictators and their horrendous crime in Yemen. As always, the American administration lacks a basic moral compass, and chooses profit over principle, profit earned at the cost of innocent lives destroyed.

It appears that the Saudi’s may have introduced a new word in the English language: to get khashoggied: that is “to enter into an establishment in peace, but end up being butchered.” His last blog has literally been written in blood and guts, and is proving to be the most effective one, as another nail in the coffin of the perverse symbiosis between the greedy West and the corrupt governments of the Middle East has been laid bare.