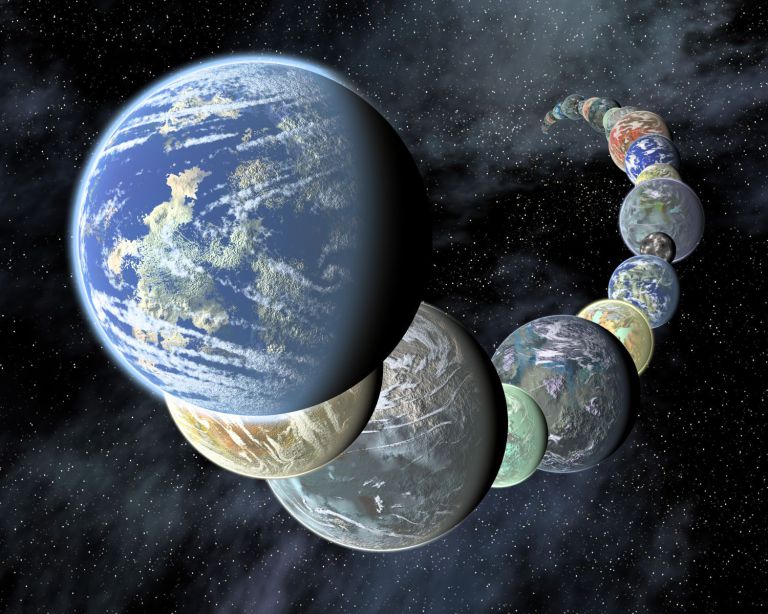 People of earth, your attention, please,”… This is Prostetnic Vogon Jeltz of the Galactic Hyperspace Planning Council,”…”As you will no doubt be aware, the plans for development of the outlying regions of the galaxy require the building of a hyperspatial express route through your star system, and regrettably your planet is one of those scheduled for demolition. The process will take slightly less than two of your earth minutes. Thank you.”
(From Hitchhiker’s Guide to the Galaxy, by Douglas Adams)

In academic circles, when the captivating question of the possible existence of intelligent extraterrestrial life is debated, the validity of religions, which view humans as the only intelligent or superior species that God has created, is seriously undermined. Mistakenly, Islam is included in this list of ‘undermined religions’. However, rather than undermining Islam, the possible discovery of extraterrestrials would actually reinforce and dramatically confirm that which is already contained in the Quran. In this article, we shall attempt to provide an overview of the Islamic perspective on this subject.

We are not Alone!

According to Islam we are certainly not alone, the Quran states:

And among His signs is the creation of the
heavens (1) and the earth, and whatever corporeal
creatures (dabbatin) that He has dispersed
throughout them. He is able to gather them together,
when He wills (idha yashao). [Quran 42:29]

There are several points that need to be elaborated upon, with respect to this key verse: Firstly, in the Quran the word used is dabbah which refers to an entity that is comprised and/or evolved from water (see verse 24:45), where it is stated that God has created every dabbah from water (dabbatin min ma-in). The word dabbah also denotes any sentient, corporeal being capable of spontaneous movement (2). Secondly, this passage states that life in this universe is widespread. Thirdly, the verse portrays that we will one day, sometime in the future, communicate and/or meet with other extraterrestrial beings and that this will be one of the signs of the Creator – signs of design, wonder and power that reflect the Intelligence that originated the Universe and its stellar inhabitants. The reason why the statement regarding the gathering of corporeal entities in this universe, relates to an event in the universe itself, rather than in the hereafter, on the day of judgment, is because when, in the Quran, it states elsewhere that there will be a gathering of entities in the next life, it does so in respect of them gathering unto God, or an equivalent qualification. However, in this particular passage, the gathering between life forms is not between them and God, but between themselves. Furthermore, when the word ‘signs’ or ‘sign’ is used, it means that the sign will, at some point, be realized or seen by human beings in this life. For example, in the Quran (10:92), it is stated that the Pharaoh who chased Prophet Moses will be preserved in his body as a sign for those who come after him. Indeed, Pharaoh Merneptah’s body today does indeed remain preserved as a sign for us in a Museum, as has been discussed in detail by Maurice Bucaille, in his now famous, The Bible, The Quran and Science. If the creatures in the rest of the universe will be a sign for us, we must, at some point in space and time, realize it concretely. Let us hope that these entities are not as insensitive as Douglas Adam’s ‘Vogons’, quoted above, or as duplicitously cunning as the aliens in a now classic Twilight Zone episode, who visit earth purportedly TO SERVE MAN. Unbeknownst to the simple earthlings, to serve man actually meant to literally serve them on the dinner plate, as opposed to being in service for man!

Remarkably, the Quran also states that there are other earth-like planets, which consequently means that they are hospitable to life. In connection with the following verse, it is important to note that the number seven in the Arabic is often synonymous with “several”, but it may also mean exactly seven. The Quran says, “It is God who has created seven heavens (samawati) and of the earth their like.” [Quran 65:12] How is this “of the earth,” that the Quran speaks of, like the seven heavens? The word sama, plural samawati, refers to “that which is above” and is contextual in nature. In Quran (67:3) and (71:15), it is stated that God has created the seven heavens, one above the other. In addition, the “lower heaven” mentioned in (37:6), comprises of planets (kawkab), indicating that the “lower heaven” or literally “the lower that which is above” points to a type of grouping, in this case the grouping of planets around one star, that is, the solar system. Taking this linguistic and contextual evidence, we realize that “seven heavens” consequently refers to the hierarchically clustered way in which the universe has been structured. For example, we live in our solar system, and, of course, beyond our cosmic neighbourhood, a multitude of other stellar systems abound. These stellar systems may be clustered, that is, they are ‘bunched-up’ together in terms of their relative proximity to each other. When you take a cluster of these clusters of stars, they form a galaxy, where our galaxy alone contains an estimated 100 thousand million stars. But these galaxies themselves are also clustered, and these cluster of galaxies are, likewise, also clustered, i.e. they form superclusters.  Astronomers estimate that the universe roughly contains 100 billion galaxies. If this “of the earth” is like the seven heavens, then it means that there are clusters of earths as well (e.g. earth-like planets orbiting nearby stars). This being the case, there would be countless of earth-like planets in the universe. It is worth noting that the Prophet Muhammad also mentioned the plurality of earths:

The Nature of Extraterrestrial Intelligence

All of this leads to the following intriguing question: If there are other entities on other far flung planets, are there any as intelligent as us, or at least have the potential to be intelligent like us? Surprisingly, the Quran does not state that we are the topmost species in the realm of the universe, in our overall attributes, intellectual and/or physical:

And indeed We have honoured the children of
Adam, and We carried them by land and sea. We
have provided them with wholesome things, having
specially favoured them above many of those whom
We have created.”   [Quran 17:70]

Yes, favoured “above many,” but not all! Perhaps, this verse is among the most overlooked in the Quran. It is here explicitly implied that there may be at least one, but likely many other species superior to us in these respects.

The following verse (13:15) categorically states that throughout the universe there are those who either obey or deviate in matters of belief, which by affiliation also implies that they would likely have parallel developments on their respective planets as on ours, in terms of God sending down Prophets to remind and warn them: “And unto God (alone) falls in prostration whoever is in the cosmic systems (samawati: i.e. on planets in the tens of billions of galaxies) and on the earth, willingly (e.g. good human beings and extraterrestrial beings who follow God’s laws) or unwillingly, as do their shadows in the mornings and afternoons.” [Quran 13:15]
The fact that shadows are being cast implies that they are in physical matter form, rather than some type of energy.

One of the reasons why a lot of Muslims are not aware of these details about extraterrestrial life is because they have assumed that when the Quran declares things in the ‘seven heavens and the earth’ worshipping God, it refers to the angels or birds. However, interestingly enough, there are two verses that tell us that there are entities other than the angels or birds that are in the ‘heavens’. Verse (24:41) factors out birds whereas verse (16:49) factors out angels as follows:

For, before God prostrates all that is in the cosmic
systems as well as on the earth – corporeal
creatures (dabbatin) and the angels.” [Quran 16:49]

To underscore the exposed evidence for extraterrestrials in Islam, here is a Tafseer (commentary) of the Quranic verse 65:12 by one of the closest and most trusted companions of the Prophet Muhammad – Abdullah Ibn ‘Abbas. Ibn ‘Abbas, when questioned about this verse, said:

If I tell you its details, you would disbelieve,
meaning you would reject it. (Then he said): There
are seven (3) earths, and every earth has a prophet
like your prophet, Adam like Adam, Noah like Noah,
Abraham like Abraham, and Jesus like Jesus. (4)
[Al-Suyuti, Durr al-Manthur, 5:581-582]

If these extra-solar worlds do have, or have had prophets then they must have revelation, or have had revelation. Is there someone out there, in the vast reaches of space, on a bluish-green or other shaded dot circling a lonely star, or binary star systems, writing an article just like this one, where we are being referred to as the extraterrestrials? It is indeed something to ponder about.

4. According to many scholars (i.e. Al-Bayhaqi, Ibn Kathir and Al-Suyuti)  the chain of this report is sahih (authentic).

(Originally published as Islam and Extraterrestrials in the May 2005 edition of the journal, The Ambition [Vol. 15 No. 5])