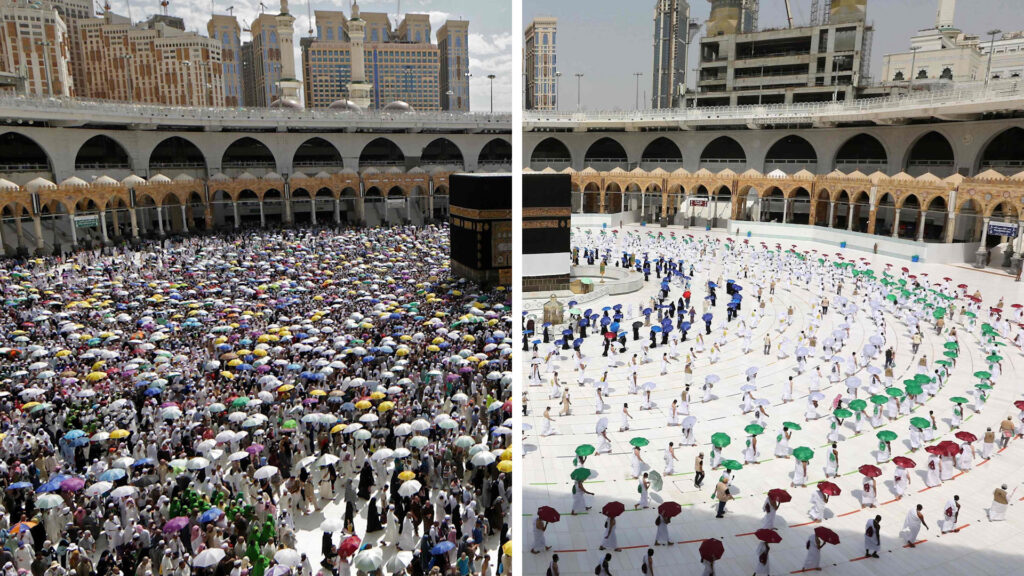 Following is the transcript of the recent Ummah Times conversation with the esteemed Mufti Ahmad Sadiq Desai who heads the body of the Ulema organization of Majlisul Ulama (http://www.themajlis.info/majlisul-ulama) in South Africa. Among the topics covered were the status of the newly instituted ‘distanced salaat’ in Masjids, Islamic legal status of vaccines and the current COVID-19 restrictions on the Hajj.

Ummah Times: What are some of the pragmatic steps Muslims can take to overcome the misinformation regarding the vaccinations in general but more specifically Covid-19 inoculation?

Mufti A.S. Desai: Allah Ta’ala says in the Qur’aan Majeed:
“It is not lawful for a Mu’min nor for a Mu’minah to have any choice whatsoever
in any of their affairs when Allah and His Rasool have decided (given a verdict).”
(Al-Ahzaab, Aayat 36)

“Then have We established you on a Shariah regarding matters. Therefore follow it (the Shariah), and do not follow the vain desires of those who do not know.”
(Al-Jaathiyah, Aayat 18)

For Muslims there is no pragmatism without the Shariah. Every issue, development or expedient must be incumbently viewed in the light of the Shariah. Muslims should in entirety ignore the misinformation which the mainstream press and governments subservient to the Bill Gates cartel disseminate. If Muslims view in the light of the Shariah the claims and theories pertaining to the covid nonsense, they will then have no difficulty in understanding that something massively sinister is underlying this bogus pandemic.

The primary problem is that the bootlicking molvies and sheikhs are keeping the masses in the darkness of ignorance. If the Ulama educate the masses and keep them informed of the reaction and action of Rasulullah (Sallallahu alayhi wasallam) and of his Sahaabah during epidemics, then there will be no confusion among Muslims.
They will then understand that in terms of Islam, there are only two reasons for an epidemic and which were explicitly stated by Rasulullah (Sallallahu alayhi wasallam), viz. it is either an Athaab or Shahaadat. There is no third objective for an epidemic.

However, since the masses have been brainwashed by the Ulama-e-Soo’ who peddle the wares of the Bill Gates-Pharma cartel, there is really no hope in them being extricated from the cesspool of misinformation and inequity in which Muslims are today floundering. The colossal ignorance of the masses is being exploited by evil ulama who have pernicious motives, and this combination of gross ignorance and ulama villainy precludes the eradication of misinformation. They will simply continue with their deglutition of misinformation and falsehood. There is nothing dehortative in the sermons of the evil ulama to assist Muslims in understanding the reality of the fraud and misinformation which is being fed to the world by a satanic clique.

Ummah Times: What is your view on the so-called social distancing Salat that’s been implemented in the Masaajid globally during this global lockdown? Can it carry any Islamic basis?

Furthermore, numerous plagues and epidemics had ravaged the Lands of Islam. But never was devil’s distance introduced in any of the Musaajid. Epidemics and plagues are not new developments in the Ummah. These creations of Allah Ta’ala existed from time immemorial. It is inconceivable for there not to be any clear directive in the Shariah on an issue with which Rasulullah (Sallallahu alayhi wasallam) was directly involved in. Thus, ‘social distancing’ is in terms of the Hadith devil’s distancing. The distances (gaps) are filled with shayaateen according to our Nabi (Sallallahu alayhi wasallam).

Ummah Times: We understand that your organization of esteemed Ulema have reminded and
declared to fellow Muslims of the Haraam nature of the vaccinations currently known, however it seems many, if not most, Muslim leaders and Imams have bought the WHO global vaccine push. Are you also attempting to help educate and convince other Muslim leaders and Imams concerning the impermissibility of ‘vaccines’? And if so how successful has it been?

Mufti A.S. Desai: Muslim leaders and Imaams who are urging Muslims to submit to the satanic plot of vaccination cannot be educated or convinced. They will perish in their evil. Only those who are sincere, but misled by misinformation and false propaganda by the evil molvis and sheikhs can be convinced of the egregious and heinous villainy of the vaccination programme.

There were many sincere Ulama who were misled by so-called ‘grand muftis and senior ulama who are all lackeys of governments who are part of the Bill Gates Cartel of conspirators. The dollars have purchased their allegiance. Alhamdulillah, after studying our literature their eyes opened up and they understood the reality of the satanism of vaccination*. Many have written to us on this issue. However, it should be understood that we are moving towards Qiyaamah. The tide of evil will necessarily gain momentum and the stage for Dajjaal is being prepared. Therefore the vast majority will remain trapped in evil and falsehood. This has been predicted by Rasulullah (Sallallahu alayhi wasallam).

Our obligation, like the obligation of the Ambiya (Alayhimus salaam), is to only deliver the Message of Truth regardless of who accepts and who rejects. Hidaayat (Guidance) is the prerogative of Allah Ta’ala. Only those whom He wills to be guided will see the light. The vast majority will remain trapped in darkness.

Ummah Times: Now that the Saudi regime has made the Covid-19 vaccination mandatory for the pilgrimages, how do you foresee the adaptability factor increasing even amongst the “unruly” Muslims who are resisting the inoculation propaganda?

Mufti A.S. Desai: The situation in Saudi Arabia where currently a kuffaar government holds sway is unpredictable. Anything can happen overnight to eliminate the precarious and current evil kuffaar rulers, or to plunge the country into internecine warfare without there being a viable government. The Libyan and Syrian scenarios could be repeated in Saudi Arabia.

It is our belief that currently it is not permissible to go for Hajj and Umrah. Musjidul Haraam has been transformed into a weird temple by the evil Saudis. The entire environment and atmosphere in even the Holy Cities are violently in conflict with the Shariah. Sincere Muslims can never adapt to the evil and haraam which the Saudi American bootlickers have perpetrated by de-sanctifying the Holy Land and all the Musaajid.

Those who resist the haraam vaccination programme will be thrown into dungeons in Saudi Arabia. We can only supplicate to Allah Ta’ala to reform the evil Muslim population of Saudi Arabia and to remove the kuffaar rulers who are masquerading as Muslims.

Ummah Times: Do you believe that the only viable option for the Ummah to escape the oppression and calamites is to revive Islamic Way of Life through the Polity structure of Khilafa? If so, what methodology needs to be adopted? If not, what do you propose we can do get our dignity back?

Mufti A.S. Desai: We believe that a true, valid and viable Khilaafah is a vain, distant pipedream as long as the Ummah on the ground remains sinking in the quagmire of moral degeneration which it has prepared for itself by having abandoned the Sunnah.

We need to adopt the Sunnah methodology which is the one and only way in which to regain our dignity and a semblance of our former Pedestal- i.e. the Pedestal occupied by the Sahaabah. Even for this objective there is the Sunnah pattern to follow. In the first 13 years of the mission of Nubuwwat, i.e. during ther Makki era, the emphasis was only purification of Aqeedah (Belief), Islaah of the Nafs (Moral Reformation) and Salaat. Besides this, nothing else. The Sahaabah were proscribed by Rasulullah (Sallallahu alayhi wasallam) from even mentioning Jihad.

This Sunnah clearly indicates that minus moral reformation which is possible only by adherence to the Original Sunnah, there will be no success, no respect and no dignity for Muslims. The Ummah today is light years away from moral reformation which is vital for Muslim success and victory over the kuffaar. But Muslims are not poised to understand this reality. Since the brains of Muslims are colonized by the western kuffaar, they are totally blind and fail to understand that our victory is reliant on the Shariah, not on emulating the Yahood and Nasaara whom Muslims, especially the evil ulama of today, are insanely bootlicking. Allah Ta’ala states in the Qur’aan Majeed:

“If you help (the Deen of) Allah, He will aid you and plant your feet Firmly (against your enemies).”