Restoration of the Hagia Sophia Museum to a Mosque 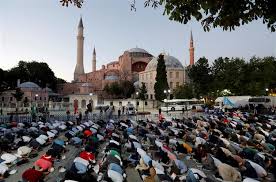